Another working weekend . . . I did manage to get out on my bike a little, and to class. But mostly I looked at the yard from the office where I was chained to my desk. I did not start back on my weight-lifting program, or do yoga, or cook the pot of black bean stew I had planned.
Well, gotta make hay . . . etc—I did get some overtime in.

So, not a huge amount of knitting got done either! Drat!
When I work a lot, I find it more soothing to spin at night. I might knit for a while after that, but the spinning quiets my mind a little more without being a strain to my eyes. So Saturday and Sunday night I spun up a little tweed sock yarn from some fiber Debbie gave me. 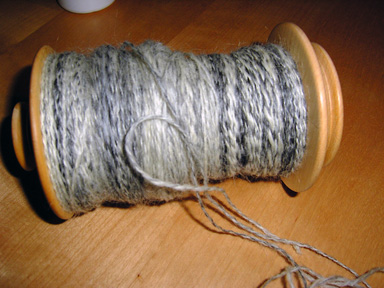 It’s a black and white generic fiber (from brown sheep, maybe?) but it will make good sox (I think she was going to throw it out, which meant, of course, that I HAD to save it. Like I don’t already have a whole bunch of fiber . . .). It ended up being less yarn than I thought it would be, but I think it will make a pair of sox, and I have a coordinating gray fiber in the same bag that will make nice heels and toes to stretch it a bit.

I looked around this morning and realized that I now have four pair of sox going at once. Four.
I don’t remember doing that, but I DO vaguely remember going a little crazy over sock yarn last week. I have the brown tweeds, which I have one done and the second one started, and the grey pinstripe in Lorna’s laces that have gotten no further than they were last week, and the Holly sox, which I took to the chiropractor’s last week and got some more done on 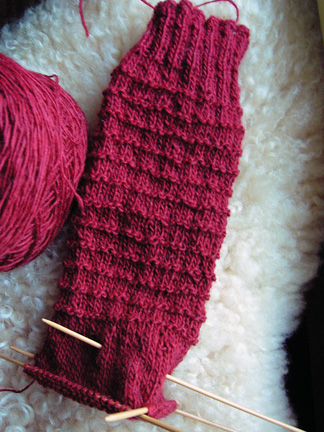 They are definitely getting longer, bit by little bit. And then these blue and tan ones, which I worked on a little during Saturday’s class 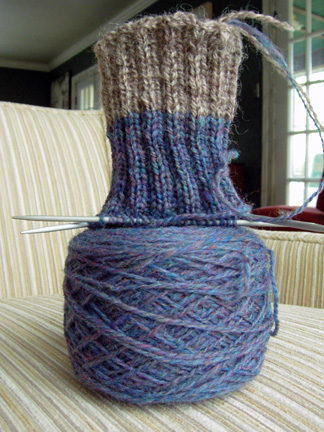 I’ll take them along today and try to get some more done.

But really, I am just dilly-dallying with the sox. My main squeeze these days is the Ostrich Plumes. It has stole-en my heart (oh groan, that was low, I admit it.) Last night, when I was finishing up work, I literally felt like if I couldn’t get my hands on it soon, I would kill someone. I was grinding my teeth! 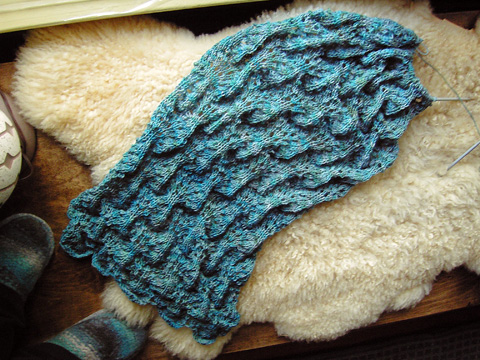 It’s so soft and so pleasing to knit. What am I gonna do when it’s over?? (oh pshaw, probably move on to another Japanese Feather Stole . . .) Now, I don’t even think of blue as my favorite color, so it can’t be that. However, now that I said that, notice how my felt clogs are exactly coordinated to this project—hmmm. That is the perfect example of Ratty-Housefrau-Garb meets Lana Turner, and doesn’t even know it should be embarrassed.

Oh, speaking of gushing, check out Two Left Needles and her post about meeting the Yarn Harlot. It’s hilarious and I was SO right there with her.

I wish Stephanie would come to Ohio. I tried to get to Pittsburgh to see her there but the weather was very uncooperative. Making the 5-hour round trip by myself over the back roads of Ohio farm country, sort of an insane idea, at least to some people. That is, some people who get handmade socks and sweaters all the time, and who are allowed to cut up the bathroom into little pieces. That is someone whose initials are DAVID. Hmmph. I don’t mean to give the wrong impression—he didn’t force me to stay home; he just suggested it very quietly.

So Brooklynne over at The Mosh Knit and I were IMing the other night about hating yarn with knots (we were talking about other things too, but we did get on a rant). Especially the company whose initials are NORO. check out Persnickety’s rant on the subject; I can’t say it any better

While I was on my soapbox, I said, “Wouldn’t it be great since we now have all these knitters who are willing to sign up for stuff like the Olympics, if we could get them all to bombard the yarn companies on one day with email about bad yarn.” and I continued to suggest that we could advertise it on our blogs and podcasts.

So Brooklynne went ahead and chose May 29th as the day. I’ll make a logo button, or if anyone else wants to, they can. I’ll try to get that posted this week, and if everyone with a blog could grab it and post it, great! (I have to come clean here: I don’t even know how to use those #$%#@ buttons myself, but I’ll make one. Perhaps someone can clue me in on how to make then operable). I will also do some research on email addresses and phone numbers for various companies.