Some people who faithfully visit Knitspot and read almost every post do not leave comments. That’s because I actually know them in real life. Of course, they will ask questions about things I’ve posted or comment to me in person. I guess I compartmentalize things a lot more than I think I do, because it always catches me by surprise when someone says, for instance, “I’m here to beg to see your dress!” or asks “how is your sock knitting coming along?"  "Is David still having to patch his socks?” (Grrrr, let’s be clear; David never had to patch his socks). I forget how public I make my knitting life and, by extension, how public my inner monologue has become! Not that I mind; it’s just funny because apparently I have convinced myself that my very publicness is kind of “private” within the blogospere, and doesn’t cross paths with the rest of my life. In other words, I’ve been fooling myself, because even I am aware that the line between my so-called knitting life and my life ceased to exist a long time ago. I’d have to pretty much cut my hands off to separate my knitting from my life at this point. After all, anyone who gets to know my knitting gets to know a lot about me too, and I need to get used to it.

But, yes, thank you, the sock knitting is really coming along, even though I have only shown off the socks I have made for yours truly.

Here’s a little catalog of sox-for-David, both in the works and in the planning stages:

I have this pair half done, and the yarn turned out to be horrid. I might make myself start the second one today. I do HATE having an undone pair hanging around. 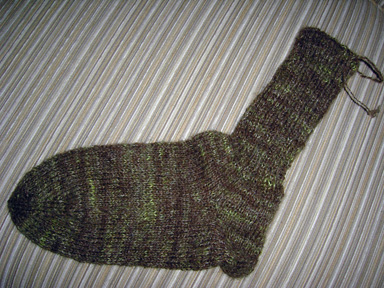 The last time I did that was about three years ago. It took me a whole year to get the second one done, and it hung over my head the whole time. The relief at finally finishing it was a real head rush. The worst part about this one? I spun enough yarn for two pair, but I am SO not making another one . . .
then there are these which i started last week:

This yarn is soft and felt-y feeling. It’s about 90% romney wool and 10% alpaca. The wool is from a local grower who offers numerous natural colors and swirl roving for tweeds. It’s good fiber that I spin a lot of. I’m ready to switch to the dark brown and start the heel.

I couldn’t stop thinking about the blue yarn I spun a few weeks ago from dyed colonial fiber. Since it is Easter, and my spiritual radar tells me it is the time for new beginnings, last night I started another pair using that with some lighter romney leftovers for the tops, heels, and toes. 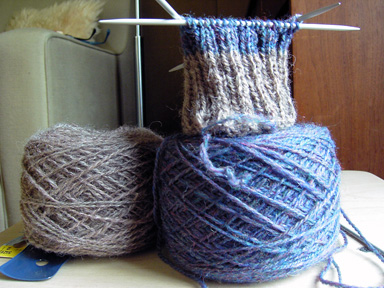 The romney is slightly heavier yarn, so I’m glad I picked that as the contrast for the heels and toes. BTW, yes I know it is both lame and highly sacreligious to use spirituality as an excuse to start more projects. Especially when I have several going already . . . like the two sweaters I’ve had on the needles for a while now (still can’t figure out why I can’t get going on those). but I do need some sock projects to take around with me this week, don’t I?
I skeined and washed two more sock yarns that I spun what seems like ages ago, but was actually about two weeks ago. 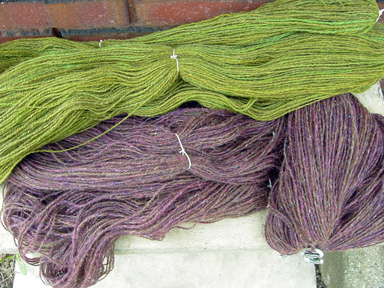 The green is a naturally brown wool that was overdyed. It turned out to have a lot of variations of greens, gold and browns, and was really nice to spin. I’m looking forward to knitting with it and might have to start a pair of socks this week. The plum/brown tweed is attractive in color, but I hope the hairiness won’t be horrible to work with. It is softer than the yarn in that awful sock at the top of the post, but not that much. It would be a pity if it was that bad to work with. I will almost certainly spin the rest of this fiber into a big soft yarn rather try to tame it into sock yarn ( I always say I will not try to make sock yarn with Hollie’s fiber, and then I do . . . and then once in a while, I get one like this green, which is awesome for thin yarn. Arrrghh). I wish I could tell a little better ahead of time when the fiber won’t be nice in a finer yarn (yeah, like when I’m buying it!).

Like this one; this Falkland always spins up into a gorgeous yarn, whether fine or cushy. 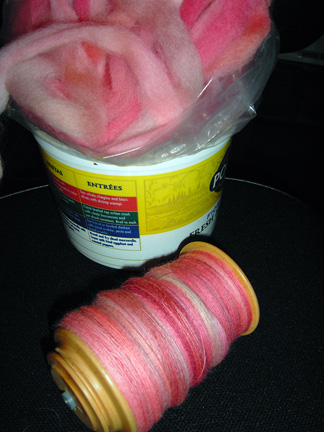 Although I’m not so much into the cotton candy pinks, I do have several little girls to knit for and this particular color is much-loved by them. (To be fair, I have many more boys to knit for, and they have completely different color preferences, so there is a balance.) If I decide to keep it for a lace item, I can dip in a brown or even an avocado dye wash to take down the color a bit.

On other fronts, I started another lacy scarf with a single skein of mountain colors bearfoot that I had laying around. Also gotta have a couple of light and lacy projects to take along with the sox! 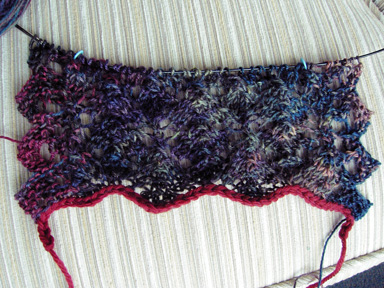 It’s not much to look at yet, but it will be pretty I think. More on this one later.
I have been holding on the gray-blue alpaca shawl I started because I think the gauge might be too loose. The thing is, it’s really soft at this gauge but the motifs look a lot bigger than I had planned. Although the fabric doesn’t look too loose, nor would it be too tight if I went to a smaller needle. 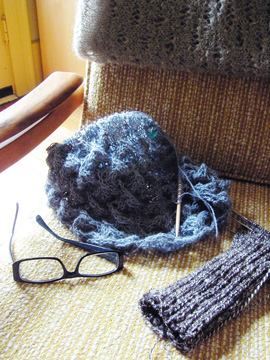 I’m really not sure, so I’ve been keeping it right near where I work at night so I can look at it while I knit and think about whether to change it. It’s not that far along that I wouldn’t mind pulling it out to make it right. I don’t want to give up the softness, but I think maybe it will still be very soft. I definitely don’t want the motifs to be gigantic, especially once it starts to stretch (this piece will need blocking; the pattern is quite “bunchy” in it’s unblocked state). Here it is with my very large eyeglasses for scale; they look a lot smaller than they are next to this lace . . .

The yarn I dyed last week all came out rather scrumptious! YAY! That wedgewood blue? Now it is shades of peacock. 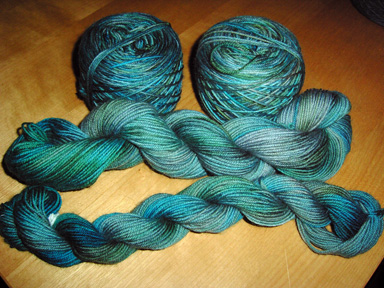 I didn’t photograph it beforehand, but you can see a little light blue peeking through the more intense colors. Interestingly, this one yarn didn’t take the dye quite as evenly as the white yarns. Though I don’t really know why (it soaked the same amount of time). With it, I plan to start another Ostrich Plumes stole to put in the shop (a sample always helps sell the pattern). 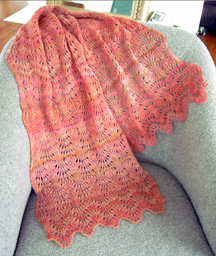 The original sample is a delicate handspun and I’m afraid it will get handled too much over there! This peacock yarn will work well with the stitch pattern. I’m expecting the colors to form “eyes” where the motif makes circular shapes.

Well, tomorrow I have classes, so I get to be at the shop all day. And Monday is a big day for receiving yarn there . . . wish me fortitude