See my nasty purple hands? That’s because I don’t follow my own advice. I always mean to put on gloves when I dye, but then the colors start to dissolve, and the yarn goes in, and before I know it, I am shoving my hands right into the dye bath. Yup, and boiling liquid does burn—but I’ll never learn. Poke, poke, poke.

Today was another dye day! Whoopee! Nothing like puttering around the kitchen of a Sunday morning, I always say. Hey, at least I’m cooking something . . .
since I worked right through Earth Day and never got to do my recycling thing last weekend, I decided to do it today. I had these yarns, see, that I bought in Greece in 1993 or so—fine, fine Italian Merino laceweight—about 1400 yds per 100gms. Nice to knit with, and really, really cheap. 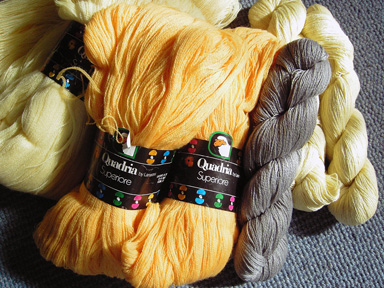 The problem must be obvious. But in case it’s not, that one color in the center? That can really only be named something like “squash”, right? I mean, if you’re being nice. And the baby yellow? It’s okay, but I got over that color a few years ago. I finally figured out that it looks awful on me. Even if it gets made into a gift for someone else, my knitting should look nice on me if I’m going to hold it for a lot of evenings in the presence of my true love, right? It should complement my skin and reflect a radiant glow onto my visage, yes? So as to raise the amorous atmosphere a notch? Hmm—knitting as an aphrodisiac—you think that has future potential?

Those fat skeins are the merino and those slim skeins are cashmere laceweight that I also thought needed an attitude adjustment. Actually, I love the gray, but again, that color is not so good on me so I thought I’d experiment with using a darker base yarn.

By the way, these posts I have done about dyeing have opened up a lot of discussion in comments and in classes about color, inspiration, dyeing, and yarn/color behavior. It’s incredibly exciting to me that I can get everyone perked-up and talking about a topic like that! I am hoping to spend a lot more time on it, as coloring yarn and fiber fascinates me, too. Please feel free to send questions and comments and I will try to speak to them. SO many people weighed in on the pink yarn debate BTW—it was fabulous! Do you know you are all split about 50/50 on whether you liked it better before or after? ALL for good reasons too.

Several people have asked how I know when the dye is done. Well, it’s not a secret that only people with YEARS of experience can know (even though, as a teacher, I should probably be all mysterious about this stuff . . .) Actually, the dye bath tells you! How cool is that?! Here is an example - this is the bath in the pre-cooking stage: 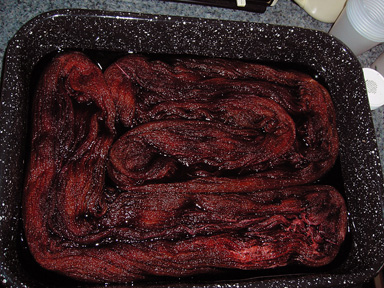 See how murky and dark the bath is? Everywhere there is liquid, it is opaque. Now, here is a bucket of yarn that’s been cooked. Look at that! 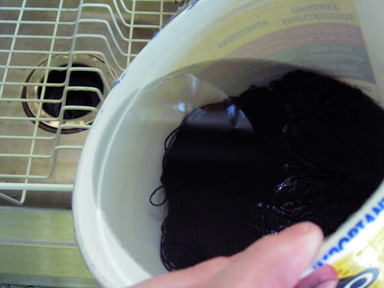 The water is practically clear. That’s what you are looking for. This means that the wool has taken up all the dye that was available in this bath.
Or if you ARE experienced and you can tell from the wet yarn that there is enough color in it, you can stop. But I’m not so good at that yet.

Today, I was trying for deeper colors with more subtle streaks and color changes. This is harder to achieve than a “rainbow” effect because so many of the dye colors look so much the same when you are working with them. In fact, many of them do not even look like their final colors very much. The more I work with them, the more I get to know what each one will do. Still, I can see that I have to do a lot of this to get good at it. This is what I ended up with:

The three skeins on the right are the cashmere, which I was very happy with as a medium to dye on. It took a LOT of dye (more than the merino) and like alpaca, does not end up being brilliantly colored, but more soft and subtle (as an example of that, the third and fourth skeins from the left are dyed in the same bath, but there is quite a difference in the dye take-up). It also seems almost impossible to felt (which I remembered from trying to shrink it before—don’t ask). I mean, those babies got a LOT of cooking and the strands are not fuzzy or sticking to each other at all.

The two skeins on the right? Those are the ones that were originally squash-colored. How much happier are we with this blood red? The Merino, however, did get almost felted. Actually more like “fulled”. It’s wanting to stick together, at least in its wet state. Hopefully, it will release as it dries. Except for that fourth skein from the left! Get this—that skein was one that I had wound into a ball about 10 years ago when I thought I would use it, but never did. So today, I wound it back into a skein and that one did not get fuzzy. I think the factory-wound skeins might already have been sticking together a little. I should have probably rewound all of them, but who knew?

Everyone will be SO happy to see this next picture—look at all this Ostrich Plumey-ness! you’ll never believe how long it is! Remember I said I thought it was a little short and skimpy (it barely kissed 40 inches pre-blocking)?

Well, I got it blocked to 80 inches! Honestly, you just can’t judge one project from the results of another. But one thing I think might be true (lace knitters, this one’s for you): superwash is super stretchy. It just grows and grows. Now, this stole may relax back an inch or two, but it will still be real close to double its original size. Now, it may also look as if it lost a lot of color, but that is just from the stretching. Putting more empty space between the yarn strands dissipates the color concentration somewhat. I’ll post a picture tomorrow of it lounging lazily across a chair (this picture is not so pretty!).

Okay, one last tidbit for today. I made a passing comment about my blue handspun sock yarn that might have given Persnickety Knitter the wrong impression (and I know I am getting off-track here, but you have to go see her bracelets; they are fantastic!). Sorry! I said it was knitting up so even that it was almost unlikeable. 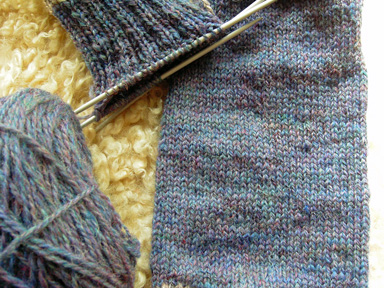 What I meant was that for me, one of the pleasures of working with handspun (especially solid colors), is the “evidence of the hand” in the unevenness of the yarn. The knitted texture is a little more lumpy-bumpy than commercial yarn. You can tell a person spun it by hand, rather than a machine having one the job. 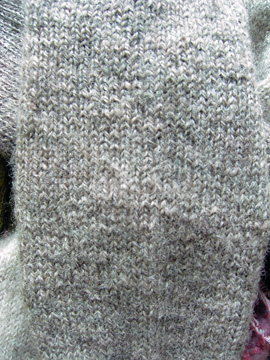 (Of course, once I started trying to explain it, I could not find or photograph a stellar example of what I meant). This is not so important in the stripey yarns I make, since the interest there is in the color shading. By the way, please please PLEASE show us those sox when they are far enough along! We all want to see them, Persnickety!