On Wednesdays, I have two back-to-back intermediate classes, each having a core group of ongoing students. These knitters have delved into all sorts of projects over the last 18 months or so, building their skills and trying new knitting concepts.

I like to be as free-form as possible with these groups so that they can choose their own progression of project work with me monitoring and mentoring as needed. I find that in this way, each person has the most positive outlook in taking on challenges while becoming part of a knitting community. The social aspect of these classes is just as important a component as the instructional material; it encourages discussion and deeper exploration of both shared and individual projects. It also provides a pleasant and supportive environment in which to learn new things and make new friends. I think it's the key to the amazing rate of progress each person has accomplished. 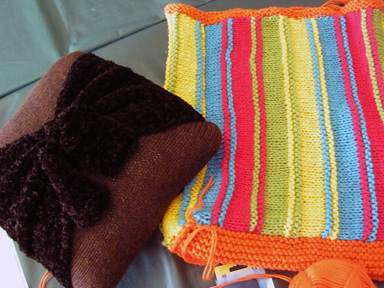 Debbie is a fairly new knitter, who joined a class in the fall. This bag and pillow are her most recent FOs. She has made a number of purses, baby items, and has learned to do cables. Next, she is making this: 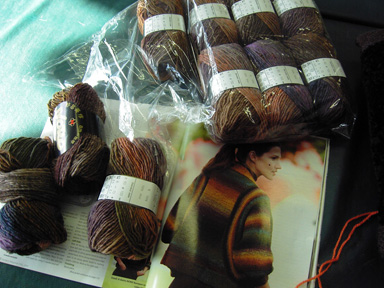 It will be her first sweater. The sample in the shop looks wonderful on her. She’s a little nervous. But Janet, who already made one sweater, will be working on the same project (Janet skipped out before I could get pictures! Janet, you can run, but you can’t hide . . .). 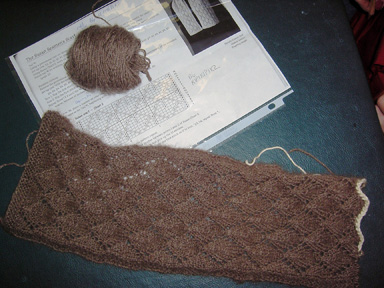 Isn’t her work pretty? We are SO jealous of Melissa’s yarn; can you see the halo around it? It’s quiviut. Say no more.

In the evening class, it was night of the knitting dead for Susan. 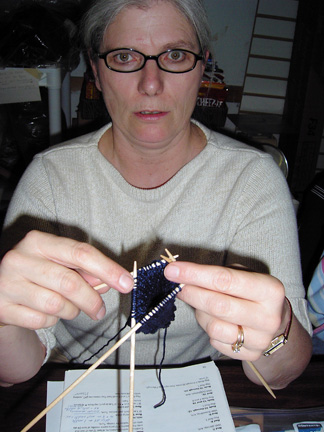 (Sorry Susan, Debbie said I had to publish it!) She’s just working through her second Koigu sock, so being a zombie worked out for her today. She finally snapped out of it when we started talking about cashmere.
My Ostrich Plumes Stole sat next to Debbie’s and they fluttered and giggled the whole time
(eyes rolling) You can see how the variegated yarn Debbie is using makes “eyes” in the Ostrich pattern, kinda like peacock feathers . . . 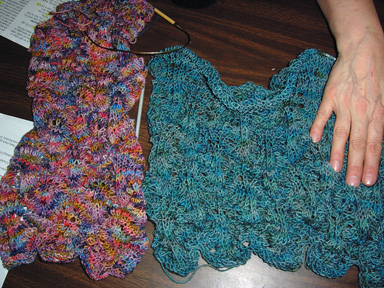 Jackie showed us her second 2-needle mitten with the anatomically correct thumb shaping (which will be felted when she’s all done). 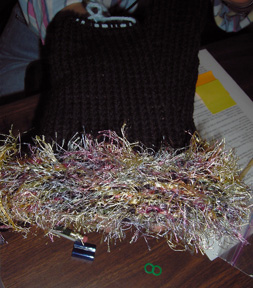 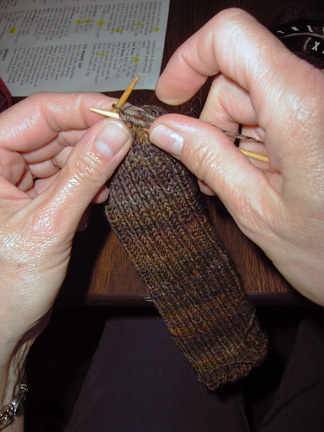 Half the class went out front to buy another ball. Peggy is making a pretty modular poncho. She says it’s easy, but it looks complicated. 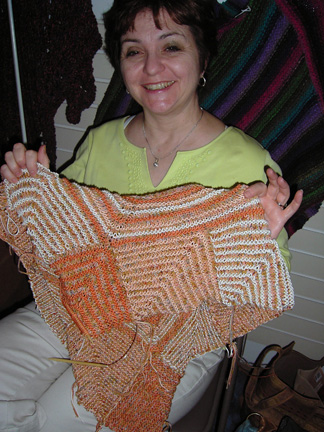 HEY! I totally forgot to check on Peggy’s sox, the first of which she has not been enjoying so much, but doing a nice job on. Peggy? Where were the sox? We have all assured her that everyone hates their first sock and then falls in love with sock knitting just after casting on the second one. She’s not buying it. Don’t worry, we will twist her arm on this one . . .

Suddenly, Jackie (she was sitting next to me) gasps, and I knew. I turned.
I said “You knit two left mittens, didn’t you?”
“Yes" she said quietly.
And of course this was where everyone jumped in with advice—
“Just make another one!” (horrified look from Jackie)
“Make two more and have two pair!” (more horrified look from Jackie)
“Rip it out!”
Here is where I jumped in. They were starting to sound like a crazy soccer crowd. Ripping it would be a pain in the patooty because she had just put the thumb in. I wanted her to try something else—something drastic that I knew she wouldn’t like.
“Well, what do you want to do, Jackie?”
“I guess I’ll rip it out—I don’t want to knit another one”
“Well, we could cut off the offending spot, so you won’t have to undo it all.”
Jackie looked at me as if I had just suggested we light the mitt on fire and dance around it naked to fix it.
“No, uh-uh”
“Aww, c’mon, Jackie; I wouldn’t wreck your glove . . .”
“No, I think I’ll just rip it out”
“(martyred tone) OK—sigh”
So she started. and after a few rows, she hit the sewn-up thumb area and the lightbulb went off.
“OH!”
Yeah, Jackie.
“Oh, let’s cut it!”
YAY!! just what I was waiting for! Okay everybody, photo op!

First, we snipped one stitch: 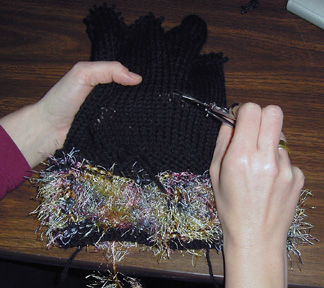 If we had a fainting couch in the back room, I’m sure Jackie would be lying on it now . . . but we don’t, so she sat next to me, hyperventilating instead. 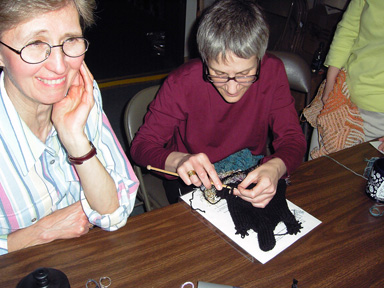 (Oh, and Debbie? Do you think you could made this pic a little less attractive??) Meanwhile, I picked out the snipped strand stitch by stitch across the row until the bad part was separated. NOW Jackie could light it on fire, or do whatever she wanted with it! 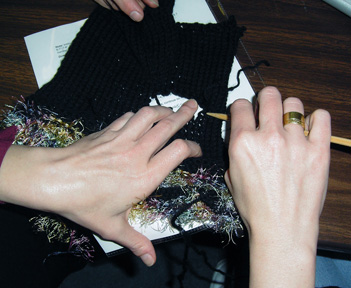 Then, we put the live stitches back on her needles, she reattached her yarn, and began to reknit, being careful to set up the thumb gusset for a right-hand mitten this time!

My work here was done.
Except, we forgot to take pix of Debbie’s surprise; maybe she will send one. Debbie is always buying stuff and sharing it with everyone. This time, I wanted her to have one!

Now that I’m blogging and my students are reading my own day-to-day progress, they seem even more excited to try new things. The posts about dyeing last week were the main topic of discussion today. For instance. I offered “dye day” workshops in the fall and winter, but we did not get sign ups for them. Now that I’ve written and photographed the process a bit, everyone is talking about trying it. It makes me feel good that my writing extends out from this brain and this page to have an effect on others that way!

It was a beautiful night and as as i rode through the dark, quieted neighborhoods, I thought about how much I enjoy my classes and how cranked I am afterwards to knit, or spin, or design something new—just to make something. I almost always feel like getting my hands on more knitting after I’ve been teaching, even when it’s been all day. I was heading home now with some sock yarn in my bike basket, my head full of the talk of the day, and plans for new work.

When I got in the door, I checked email, downloaded pictures, and finally got showered and changed. To the tune of a whining drill from the third floor, I picked up the tweed socks to finish the brown toe (I did not knit on it in class as I had planned; Ostrich tempted me away). 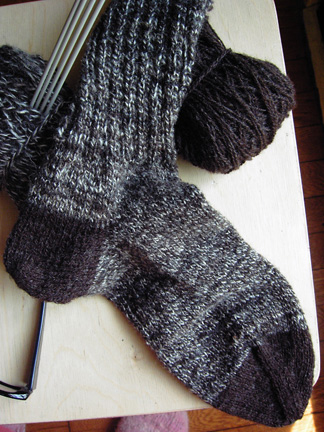 When that was done (and only then, I swear), I cast on another new sock from the Lorna’s Laces “Pinstripe” I brought home. 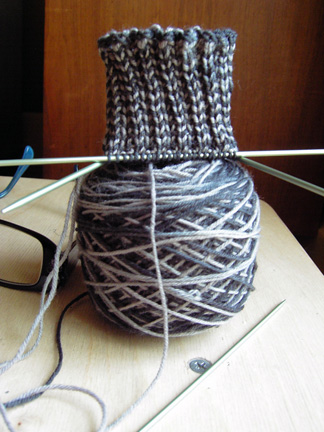 Mmm. There’s nothing like one’s first time.
(I mean the yarn.)