For a project that I thought of as strictly catch as catch can, this sure got finished quickly. I mean, it’s not like I go around my coffee for hours every morning (or even one hour)—I've really only been putting a few rows on here and there when I get a chance.

But there you have it—those are the projects that get finished. 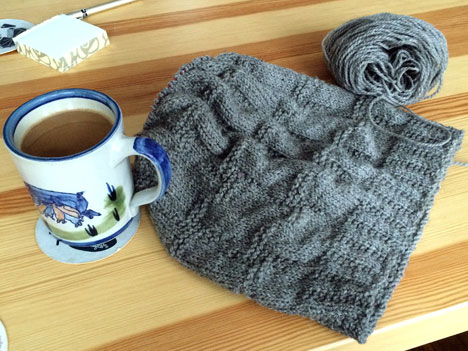 I even managed to get it blocked today. I put it on to soak while we went across the alley to the office for a meeting and when I came back, it was ready to be squeezed, shaped, and laid out to dry (it’s about halfway there, now). 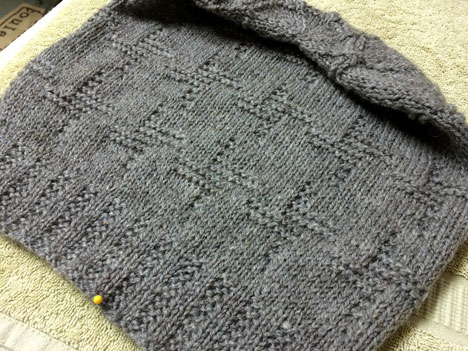 What I’ve done here is knit up a new version of the recently released Natty Cap  for David in our new Tide Pool shade of Kent DK. I noticed that a couple of his hats are looking a little worn. The pattern doesn’t really include a size that will fit him, so I knit the largest size using needles one size bigger, which worked well with this lofty, squishy yarn. It’s funny about the Kent—each shade has its own unique character; Beachglass is draper, White Caps is loftier, and White Sand has a bit more sheen. Not enough to affect the outcome of the project at hand, but enough to enjoy each one as I work with it. I love that about them.

You know what that means.
(Well, it actually means two things—time to pick out a couple of buttons and time to figure out what the next sideline project will be.)

Let’s address the first issue first; I almost have too many choices that will work great with this fabric.

The first are these bone buttons that are mostly blackish, but with cream streaks along the grain. I like how where the black and cream meet, the material goes to brown. I used these on my Scotty cap and I love them with the Stone Soup yarn, but I find them a little bit boring on this hat for some reason.

There were a couple of options in resin material that I like well enough, but again, a little boring, though I DO like the color of the brown ones against the gray fabric. That helped me narrow things down a bit.

Every time I need buttons for an accessory, I try these blocky cedar ones; I love them so much, but their day just hasn’t come yet. I think in my heart I’m holding to use them along the front of a knitted coat using my own handspun yarn. They’re going to need some BIG buttonholes and a narrow hat band just isn’t the right place for that. But again, I’m loving the color contrast with this fabric, yum yum!

Ditto for these quirky antler ones; I have just two of these, rescued back in the 80s from a designer military-style jacket that was being thrown out by a friend. I thought for sure they might work here, but the effect wasn’t what I’d hoped for. I think we really need some color.

Another selection in natural bone from our shop—those work really well and were in the front-running for a while. They don’t have a LOT of color, but what they have is distinct and makes an interesting statement. I like these!

But then, I tried these other persian green bone buttons. Now these are more like it—they are kind of vintage but with a modern pop. I love the color against the gray fabric, especially when I step back a bit.

I’ve always wanted glasses frames in this sort of color, but have not put much work into finding them for myself.

Anyway, that’s settled; it’s going to be the persian green ones (we have these too—we’ll get them listed ASAP). All that’s left on this project then is for the hat to dry completely and even that is almost done.

Which brings me to that second point—what is the next sideline project going to be? 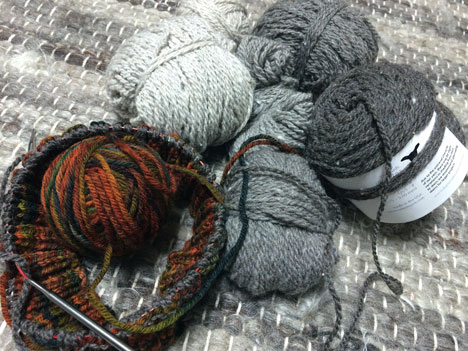 Actually, this has been languishing in a project bag since October and I really want to get it done. It’s another hat—this time for me, me, me—based on my Mass Transit Cowl design that I released back in the fall. 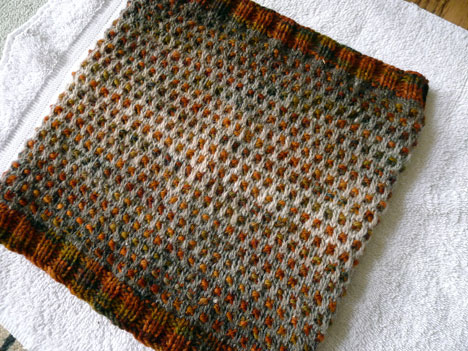 Remember this version that I knit with shades of Stone Soup DK and some leftover Briar Rose Fourth of July? I've been wanting a hat knit in this fabric ever since and I’m going to make one now, darn it, before winter is over.

Again, I’ll just keep it in the kitchen and out a few repeats on here and there in the mornings and while I’m cooking. I’m hoping I can do as well with this project as I did with David’s hat . . . 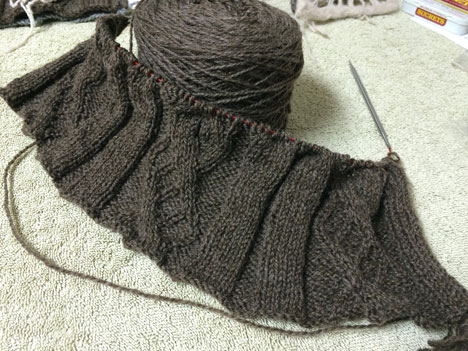 Meanwhile, my new sweater project is clocking right along—I cast on for the front Monday night but didn’t get to work on it much Tuesday. Last night during our knit night and then afterward while watching TV, I managed a good bit. As soon as I'm done writing this, I’m heading upstairs to knit on it some more. Can you tell I’m anxious for a new sweater?

Speaking of Kent DK, look what we got in from Anne Marie yesterday 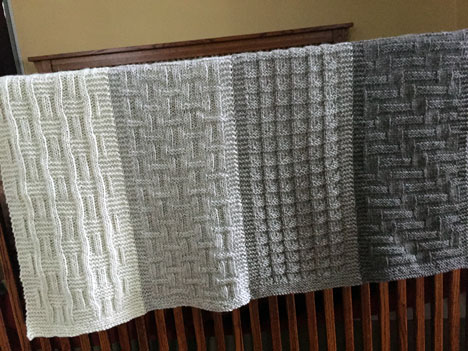 A gorgeous sample of one version of our Blanket Statement Club project, knit in four shades of Kent DK—Whitecaps, White Sand, Beach Glass, and Driftwood. This version is so elegant; Kent has a lovely soft sheen from its romney wool content that really highlights the textured patterning. 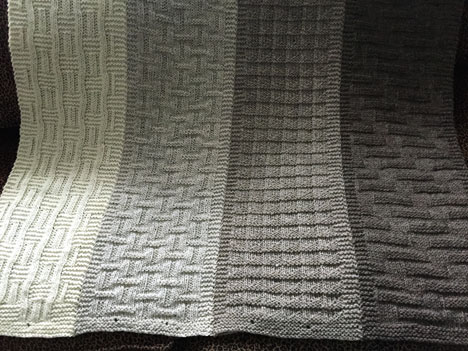 Omg, it’s so light and airy and SOFT! I just want to curl up in it. Isn’t she a spectacular knitter? We’re so lucky to have samples of her work in our collection; thank you dear Anne Marie!

I also heard that Jen Hagan has just finished another Glentrekker Cardigan in our Kent DK yarn. This Glentrekker in gray is just beautiful; she knit it as part of the Glentrekker KAL in her Figheadh Yarnworks Ravelry group. 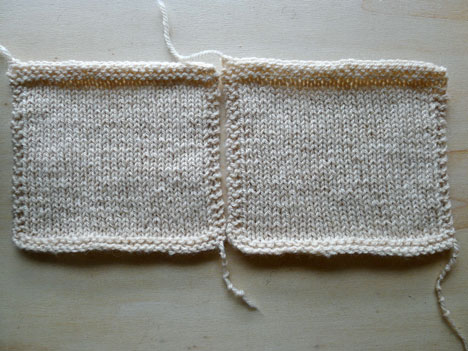 Speaking of sweaters, I’ve been swatching with our Better Breakfast yarn, that luscious dehaired alpaca and merino blend, which we are rolling out for real at the end of next week. Every shade (and a couple of new ones!) in both weights will be restocked, yay!

I’ve been wanting to knit myself another Ivar sweater for months, ever since my original one became store property. I mean, I am really anxious to have a gray Ivar pullover. the new dark gray shade, Warm Coals, is coming in over the weekend and when it does, I’ll be ready. 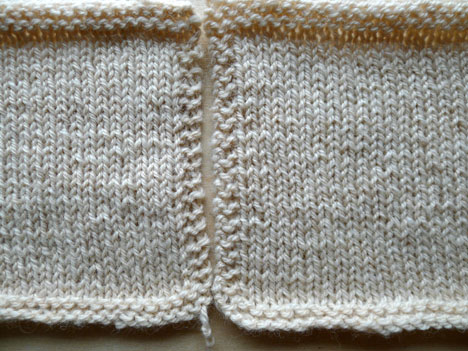 I’ve swatched on two needle sizes because the first one (right) hit the stitch gauge okay but was a little loose on the row gauge. The tighter swatch (left) hit the row gauge but is a hair tight on the stitch gauge—like a half stitch over four inches. I actually think that will be fine; it’s easy enough to block out the width and inch or so.

In this case, I really prefer the fabric of the tighter swatch; it’s springier and more stable. For a yarn with alpaca content, that’s a plus. 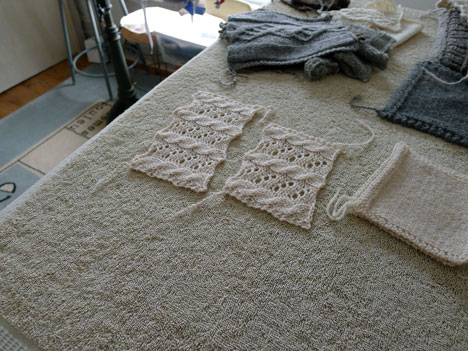 While I was at it, I knit some lacy swatches for another idea I had to knit a reversible shawlette, this time with the Muesli shade. This will be a sideline project after my hat is done; I’m still deciding whether it should be a crescent or a triangle. What’s your vote?