Ummm, where’d that come from? 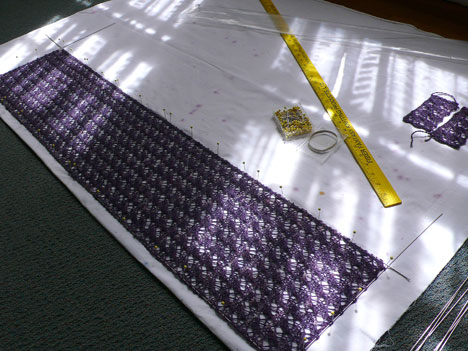 Heh. Yes, well I sat down last evening to swatch that cashmere/silk yarn the Lilith sent me and I did swatch the yarn. 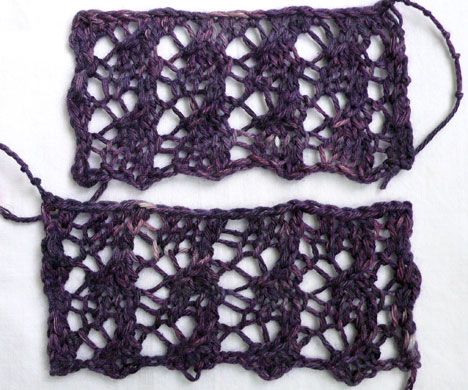 I’ve had my eye on this one stitch motif for a while, but it never worked that well in laceweight for a scarf. Here, I had some fingering/sport weight yarn and by devil, it worked a treat.

I did two swatches, one on size 5 (which I really thought was the one) and one on size 6 needles. After soaking and pinning, I could see right away that the looser swatch was just what I wanted. It looked just like a blackberry thicket . . love.

And wouldn’t you know—the name of this colorway is Bramble. Namely, I called the pattern Brambler. 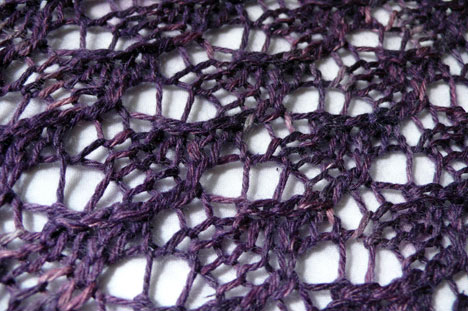 “See—this was meant to be”, I thought, “Maybe I’ll cast on and just get it set up by knitting a few repeats. It’s 10 o’clock now, I’ll get it started and then work on my sock while we watch TV.” Next thing I knew, I had a third of the scarf done. Then a half. When we went up to watch TV, I did bring the sock along with the scarf, but I don’t think I seriously considered working on it even for a minute.

That is to say, be warned: this yarn and pattern will cast a spell on you. Instead of saying just one more row, I kept saying, just one more repeat (because they’re so short, you see.)

And oh, what a spell it is. Please, be my guest. Fall.

I really mean it—if you have been dying to try knitted lace with pattern stitches on both sides of the fabric, this is the pattern to start with. it’s so easy you will surprise yourself. You will be making knitted lace before you know it, and nary a p2tog tbl to be wrought.

I never intended to knit a whole project in seven hours—it just happened. For those who have been wondering which is the fastest Little Nothing, I think we have an answer—7 hours/one skein; what emergency won’t this cure?? In fact, I know just who to gift this to. I even knit mine a little longer than I usually like the Little Nothings to be because I was so close to the end of the single skein.